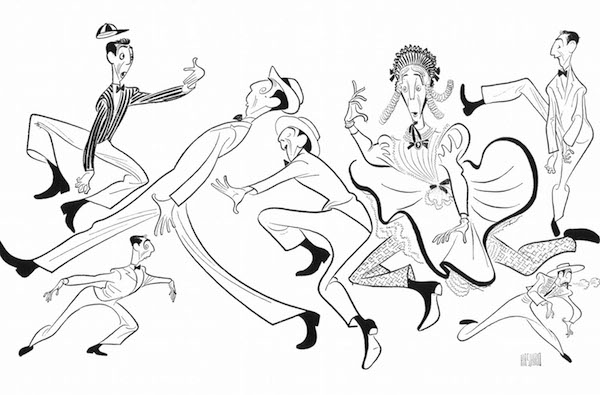 Jacob's Pillow Dance Festival is presenting a special installation inside their Doris Duke Theater this season celebrating the dance work of Hirschfeld entitled, Hirschfeld on the Move, featuring dancers of all kinds from 1937 to 2002. The Al Hirschfeld Foundation is delighted to partner with the "Pillow" to present this unique installation. From Norton Owen's, Director of Preservation at Jacob's Pillow introduction:

"The astonishingly prolific Al Hirschfeld (1903-2003) produced more than 10,000 drawings over his lifetime, immortalizing performers of all kinds in an unmistakable style.  A documentary on his career was entitled The Line King in tribute to his uncanny ability to capture the essence of an individual on paper, often using just a few brushstrokes.  In his 99th year, Jacob’s Pillow commissioned Hirschfeld to honor its founder, Ted Shawn, in tribute to the Pillow’s 70th anniversary season.  He fulfilled all the requirements of the commission with customary economy, depicting Shawn, the Pillow Rock, and the idea of nature—all captured with imagination and wit, suggesting that even the trees seem to dance at Jacob’s Pillow.

"Hirschfeld’s eye for movement was as remarkable as his sense of line, and the drawings on view here encompass performers from the late 1930s to his final year.  These are among thousands of images now available on the comprehensive website of the Al Hirschfeld Foundation, which has generously shared its resources for the purposes of this exclusive new exhibit.  This celebrates a new partnership between the Foundation and the Pillow, making the Shawn image and many others more widely seen than ever before.

"In an appreciation written just after Hirschfeld’s death, New York Times art critic Michael Kimmelman wrote, 'Line as movement—prancing, skipping, twisting and dancing, was the vehicle through which Hirschfeld conveyed the adrenaline rush of live theater and his absorption in the here and now, resulting in art that looks eternally, uncannily fresh.'  Indeed, we are left to marvel that Hirschfeld’s artistry continues to dance on."

On August 13th, the Foundation will present a one-day show and sale of Hirschfeld dance prints and original draiwngs to support Jacob's Pillow, the “hub and mecca of dancing” according to Time magazine; “one of America’s most precious cultural assets,” claims Mikhail Baryshnikov; and “the dance center of the nation” is how the New York Times describes the Festival.