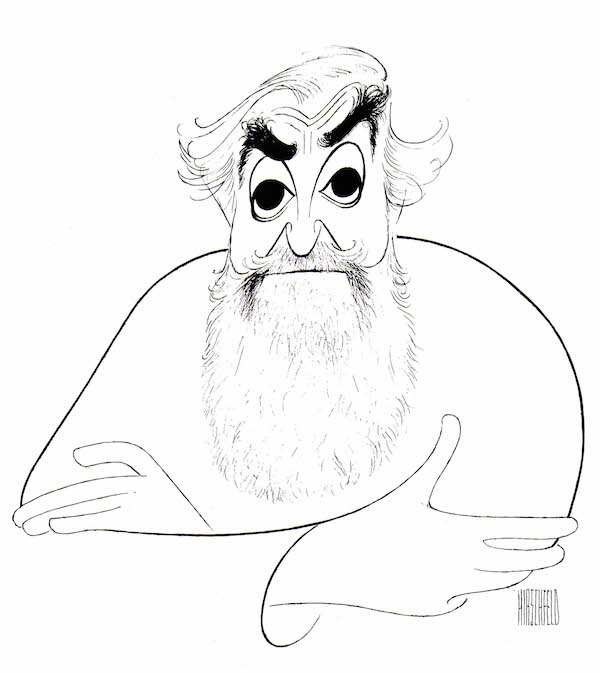 » New York, NY
Exhibition Dates:
Fri, 2015-05-22 to Mon, 2015-10-12
Al Hirschfeld revered the theater, with all its creative aspects. His drawings continue to mesmerize us with their fluidity, composition, and cinematic style. “He glorified the artistic genius of those who created cinema and theater.

Acclaimed portraitist Al Hirschfeld (1903–2003) immortalized celebrities and Broadway productions with his iconic linear calligraphic drawings for nine decades, establishing himself as one of the most important contemporary portrait artists. This spring, the New-York Historical Society will present The Hirschfeld Century: The Art of Al Hirschfeld, on view from May 22 through October 12, 2015, honoring the renowned portraitist whose work documented the performing arts in the 20th century. Organized by Louise Kerz Hirschfeld and guest curated by David Leopold of the Al Hirschfeld Foundation, the exhibition will feature more than 100 original drawings, from the artist’s early work for Hollywood studios to his last drawings for The New York Times.

Known by many as “the Line King,” Al Hirschfeld was widely considered one of the most important figures in contemporary drawing and caricature. Celebrities considered it an honor to be “Hirschfelded” and his drawings brought the energy and exuberance of Broadway to the page. The exhibition will feature classic portraits of Charlie Chaplin, Carol Channing, Ella Fitzgerald, Jane Fonda and Ringo Starr, as well as cast drawings from such landmark productions as Fiddler on the Roof, West Side Story, and The Glass Menagerie. Also on view will be selections from the artist’s sketchbooks, ephemera, and related videos.

“Al Hirschfeld revered the theater, with all its creative aspects. His drawings continue to mesmerize us with their fluidity, composition, and cinematic style,” stated Louise Kerz Hirschfeld, President of the Al Hirschfeld Foundation. “He glorified the artistic genius of those who created cinema and theater.”

Exhibition Highlights
Visitors to The Hirschfeld Century will explore the artist’s career chronologically, beginning with his pre-caricature days at Selznick Pictures in the early 1920s to his last works in theater, film, television, music and dance in 2002. A video showing Hirschfeld’s working process, from inception to completion, will also be on view.

Among the highlights is a 1928 drawing for MGM depicting the fledgling comedy team Laurel and Hardy in a bed with a brightly colored blanket, ingeniously made from a collage of wallpaper samples. An image of actress Ruby Keeler from No, No Nanette (1971) captures the wild energy of the 60-year old actress in her comeback role, enthusiastically tap dancing with arms and legs a-blur. Portraits of more recent stage legends like Jerry Orbach (in 42nd Street, 1980) and Sandra Bernhard (in I’m Still Here… Damn It!, 1998) evoke their big personalities with sparing lines.
When his daughter Nina was born in late 1945, Hirschfeld began to hide her name in the designs of his drawings, creating a hide-and-seek game for his viewers that Hirschfeld called “a national insanity.” Visitors to the exhibition can continue the search, but might initially be stumped by Nina’s Revenge (1966)–until they realize that her curly hair and folds of her clothes contain her proud parents’ names (“Al” and “Dolly”).

Programming and Publication
On May 28, Louise Kerz Hirschfeld, Robert Osborne and Harold Prince will discuss the caricaturist’s life and legacy through his art, career, and personal relationships (for more information, visit nyhistory.org).

In conjunction with the exhibition, Alfred A. Knopf will publish the first in-depth study of Hirschfeld’s art. The Hirschfeld Century: A Portrait of The Artist and His Age (May 2015) is a comprehensive look at Hirschfeld’s career, written by David Leopold, guest curator of the exhibition and Creative Director of the Al Hirschfeld Foundation. The book includes more than 300 illustrations, many of which have never been in any published Hirschfeld collection before. 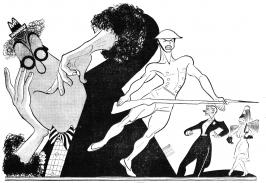