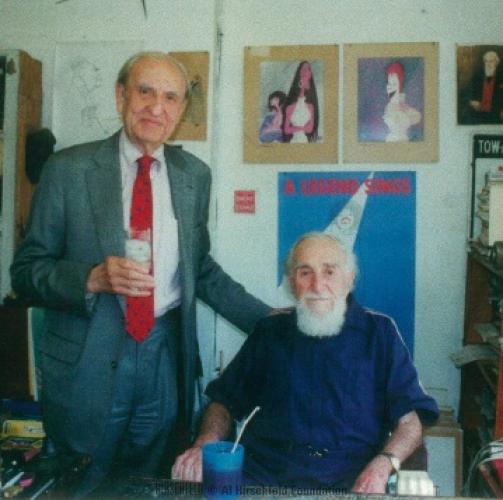 Al Hirschfeld and I adored Arthur. From the time we married in 1996, we had some of the best dinner parties with Arthur and Barbara. Our table was a center of cultural and political conversation. He mesmerized us with the behind the scenes stories that reporters already knew as legend.

When Al Hirschfeld approached his 100th birthday, Arthur and I assembled his celebration. What to do for the foremost theatrical artist of the century? We had lunch at Sardi’s one afternoon for inspiration, and later at the New York Times office. We came up with the idea of a theatre named for the artist.

I suggested we contact Rocco Landesman, then president of Jujamcyn Theatres. With one phone call, Arthur convinced Rocco of our plan, and within a week it was approved by the Jujamcyn Board. The word was spreading on Broadway!

How to tell Al? I asked Arthur to visit the studio as soon as possible. When we told him the news, a look of absolute wonderment appeared on his face. It was pure joy. With a smile he said, “Now I can join my colleagues Brooks Atkinson and Walter Kerr with a theatre naming. If you live long enough, everything happens.”

Sadly, Al did not live to see the new marquee go up over the former Martin Beck Theatre in June 2003. It now stands as a memorial for the legendary artist.

It brings good luck to all the productions on the stage. As Daniel Radcliff told me, “It is an honor to appear in this theatre.”

With fondest memories, I say it was an honor to have known Arthur Gelb.