Four of the Three Musketeers: The Marx Brothers on Stage 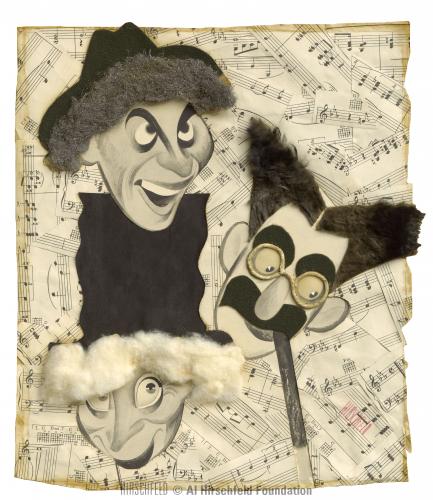 When MGM signed the Marx Brothers in 1934, the studio turned to Hirschfeld to create advertising art for their first film, A Night At The Opera.  For Hirschfeld it was a watershed moment because he felt that the comedy team “started to look like the drawing, rather than the other way around.” Hirschfeld’s portraits of the Brothers so definitively captured them that all future drawings by any artist looked like Hirschfeld’s, and even the Marx Brothers themselves tried to conform to Hirschfeld’s image. For their second MGM film the following year, A Day At The Races, the MGM costume department worked on getting Groucho’s coiffure to be like the two triangles of hair that Hirschfeld had given him.

There had been plenty of drawings of the Marx Brothers before Hirschfeld’s. They had been on stage for nearly twenty years before their first film in 1929, beginning in small time vaudeville and ending up on Broadway. The story of how they got there is fascinating, and Al Hirschfeld Foundation board member Robert Bader tells it all in his new book, Four of the Three Musketeers: The Marx Brothers on Stage, the first comprehensive history of the quartet’s  “hardscrabble early years honing their act in front of live audiences.”

From Groucho’s debut in 1905, Bader recounts the story of how the act was created, how they got their names, and how they developed their well-known personas—literally how the Marx Brothers became the Marx Brothers. Despite stacks of books on all things Marx, including memoirs by the team themselves, this career-defining period of their story has never received the attention it deserves, and, it turns out, what stories have circulated have often been wrong or misleading.

Bader has spent more time researching the Marx Brothersą decades in vaudeville than the team actually spent in vaudeville. In tracking down virtually every performance, he reveals the true story of their development, as well as provide context to the world of performance and popular culture of the time. Using first hand accounts, reviews, research into the now arcane world of vaudeville, he delivers a remarkable tale, and a pretty amusing one at that, that both corrects the record and expands it significantly.

That the Marx Brothers survived, let alone prospered, is a testament to their talent. Managed, or some would say mismanaged by their mother in their early years, they proceeded to make virtually every wrong move an act could make, including getting banned twice from the big time vaudeville circuit. Even their first foray into filmmaking proved to be disastrous. Yet they preserved and connected with audiences in a way that defies easy explanation. Bader shows how that magic came to be. The story of Groucho’s mustache is worth the price of the book alone.

Despite their long tenure on the stage, Hirschfeld never drew the Marx Brothers there. He never drew any vaudeville act. Their first two Broadway show in 1924 and 1925 were before Hirschfeld started his nine-decade career of theater drawings. He missed their third and final Broadway show, Animal Crackers while he was honeymooning in Russia for five months. Nevertheless, he would draw dozens of posters, promotional pieces, and newspaper ads for their MGM films from 1935 through 1941. He captured not only Groucho when he made the transition to television in “You Bet Your Life,” but also Chico and Harpo when they appeared in the series “General Electric Theater” in 1959. A number of the aforementioned books have covers by Hirschfeld.

In a story reminiscent of the Marx Brothers many mistakes on the stage, in 1963 Groucho wrote a book, “Memoirs of a Mangy Lover,” and asked his publisher to get Hirschfeld to illustrate it. The publisher followed his instructions and got Hirschfeld to provide drawings for the book, only it was Leo Hershfield not Al Hirschfeld.