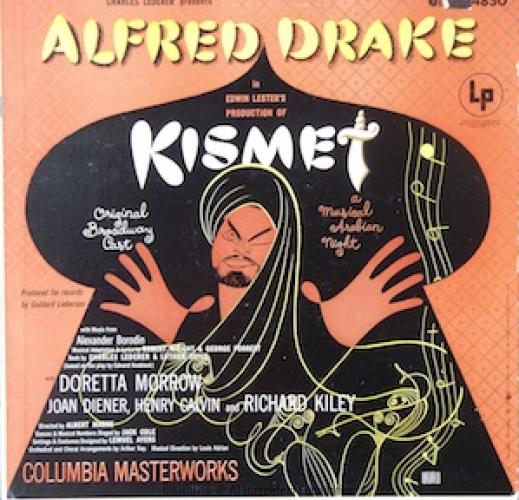 Illustrated covers for most LPs were only introduced in 1939 when Alex Steinweiss became the first Art Director for the new Columbia Records. Steinweiss first developed the jacket for the new long playing records. Drawing on his European poster traditions, Steinweiss went on to create approximately 2,500 covers over a career that spanned five decades. He worked at Columbia until World War II, then split his time between his work in the Navy and Columbia. After the war he became a consultant to the label.

One of his last regular covers was the cast album of Kismet, starring Alfred Drake. Instead of creating a design from scratch, Steinweiss utilized a Hirschfeld drawing that originally appeared on the advertising art for the Broadway production, and slightly recast the image in an Arabian tent silhouette. Hirschfeld also supplied a cast drawing of the production to the Times that ran the Sunday before the show opened on Broadway.

The show’s star was an old firend of Hirschfeld’s and eventually a neighbor on 95th Street. The two men had daughters nearly the same age, and for Samantha Drake’s 11th birthday, Hirschfeld included her name in his drawing, and was promptly besieged with congratulations on the birth of his new child.