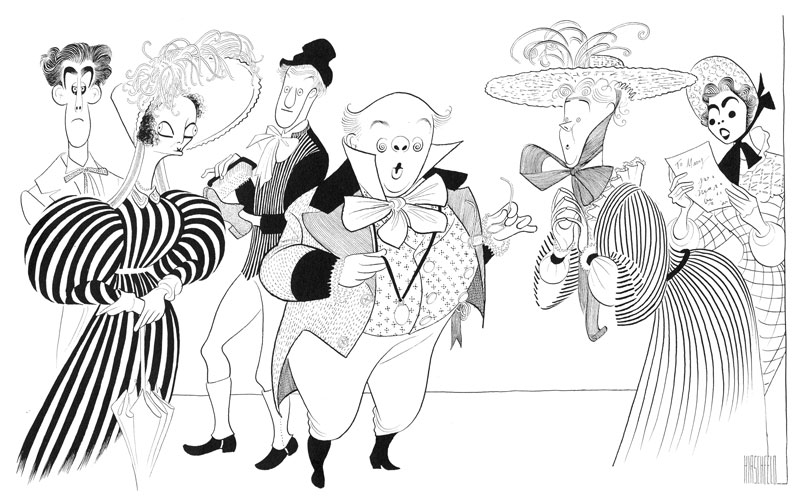 » Society of Illustrators, New York
Exhibition Dates:
Tue, 2012-04-10 to Sat, 2012-06-02
“I am not at all sure as to whether or not my drawings are even ‘caricatures.' I would feel more comfortable being classified as a ‘characterist,’ if there were such a word or school. All I know for certain is the ‘capturing of a likeness’ is of secondary importance to me. My primary interest is in producing a drawing capable of surviving the obvious fun of recognition or news value. The capturing of a likeness is of no more importance to me than the humming of a tune! The subject matter of ‘likeness’ serves merely as stimulant or catalyst — a sort of springboard for an unpredictable dive into the unknown. Fortunately, I have never been at a loss for subject matter.”

“Hirschfeld was not the best at what he did,” says David Leopold, archivist of the Al Hirschfeld Foundation, “he was the only one who did what he did. Hirschfeld looked with an artist’s eye, but with a journalist’s intent, to capture the magic of performance. He said that his contribution was to take the character, created by the playwright and portrayed by the actor, and reinvent it for the reader.”

Hirschfeld purified the detail of his pictures, and enriched and intensified the viewing experience by communicating volumes in a single stroke. He gleaned the salient characteristics of his subject and transformed the ordinary aspects of an individual into an iconic summary of his or her life or a character’s life. Character is the essence of what Hirschfeld captures in his drawings, providing, in the words of Wendy Wick Reaves, “an epigrammatic portrait.”

“Hirschfeld’s art triumphantly refutes all the misconceptions of caricature,” wrote former Whitney Museum Director Lloyd Goodrich. “There is nothing negative about it; its humor, while sharp edged, is affirmative and gay. It takes all kinds of liberties with literal facts, but it grasps essential truths of character.”