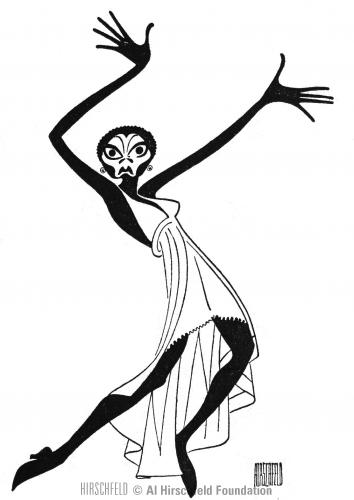 Vivian Reed's performance in Bubbling Brown Sugar, a revue of Afrrican American composers such as Eubie Blake, Duke Ellington, Fats Waller, and many more, was career-defining for the young performer. Known primarily as a singer before the production, her award-winning performance as "Young Irene," she became a much sought after singer and dancer who appeared on television and stages all over the world

Hirschfeld caught her in her performance of the classic "Sweet Georgia Brown," which would become a signature number for Reed. She had suggested the number during her auditions for the show, and originally it was to be sung around a piano, but Reed suggested they add dance to it and it became the hit of the show and made Reed a star. Her hometown of Pittsburgh, declared a "Vivian Reed Day," and soon she was off to Hollywood.

Hirschfeld drew her in her next Broadway perormance, It's So Nice to Be Civilized, but for Reed lightning did not strike twice and the show closed within six days.