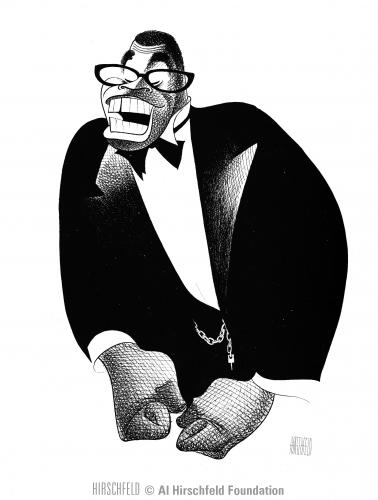 Last Fall, James Earl Jones received Actor's Equity Paul Robeson Award because he "best exemplifies the principles by which Mr. Robeson lived", the required winning criteria. Jones, who was in London starring in Driving Miss Daisy, sent this message: "Mr. Robeson was blessed with many endowments-among them the scholarship and athleticism of his youth, and the activist commitment that followed his fame as a performer. Perhaps he reached the most souls (including mine) as a singer and artist in the performing arts, and in doing so, he mightily elevated the importance of art to humanity."

In January 1978, almost two years to the day after Robeson's death, Jones opened on Broadway in a one man show about Robeson. The performance was later filmed.

Hirscheld drew Jones x times, but the actual Paul Robeson only once, in 1942 in Othello, starring alongside Jose Ferrer and Uta Hagen. it was the longest of any Shakespeare play on Broadway.