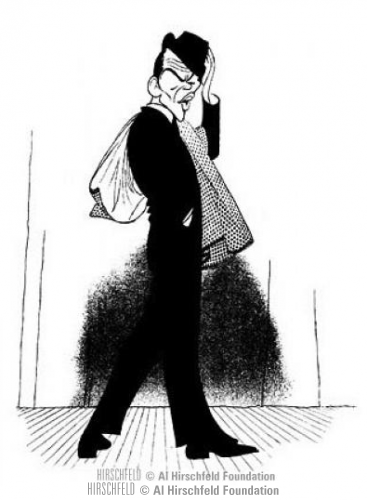 Frank Sinatra telephoned in February 1962 to invite Al out to visit the set of his new political thriller, The Manchurian Candidate. Al went out to Hollywood and drew dozens of sketches of the cast at work, and in between scenes for publicity drawings to promote the film. His first drawing after he returned was a crowded work showing the cast in costume and crew seated around a radio on the set as they listened to John Glenn became the first American to orbit the Earth, aboard Friendship 7 on February 20, 1962. The second, simpler but still packed with details, was a striking composite of scenes from the film that showed the action but told none of the plot. At that point Al had been drawing Ol’ Blue Eyes for nearly 20 years, and he would continue drawing him for another forty, creating forty six drawings of the singer over the years. Mutual admirers, Sinatra and his wife, Barbara collected a number of works over the years.

On March 4th a new exhibition celebrating the centennial of Frank Sinatra will open at the New York Public Library for the Performing Arts (home to Hirschfeld’s barber chair and desk, as well as the site of last year’s acclaimed exhibition, “The Line King’s Library”) and Hirschfeld will play a role in the show. Prints of some the most celebrated drawings of Sinatra the trace his evolution from teen heartthrob to legend will be included in the exhibition.

“Sinatra: An American Icon” is the official exhibition of the 2015 Frank Sinatra Centennial. Curated by the GRAMMY Museum of Los Angeles, in collaboration with the The New York Public Library for the Performing Arts and the Sinatra Family, Sinatra: An American Icon tells the story of a master singer, performer, recording artist, and actor. Many of the artifacts included in the exhibit are from the Sinatra family’s personal collection. Also on display will be rare concert and interview footage, personal correspondence and private photos, awards, and other memorabilia.

Premiering in New York, Sinatra: An American Icon then travels to Los Angeles and other U.S. destinations.