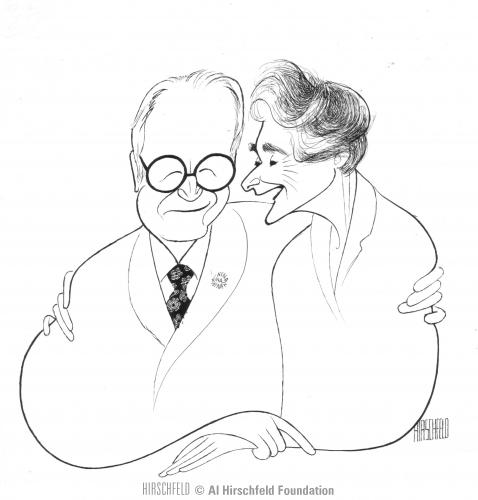 Last night Edith and Marty Segal hosted a birthday party for my late husband Al Hirschfeld in their apartment on the 53rd floor. Surrounded by magnificent West side views of the Hudson River.. .a very happy group of Al’s friends Barbara and Arthur Gelb, Zoe Caldwell and Robert Whitehead, and Marge and Andy Rooney attended yet another celebration for their oldest and most beloved friend.

The mood was electric…mid summer fun. ln their brief toasts, each man was emotionally overcome with admiration for Al...it was so touching. Andy said he didn't think he could make a' new friend after the age of 75. But he sat next to Al at a party, they drank bourbon together, and the die was cast. He presented Al with a hand make desk clock and the scrapings. Arthur claimed that of aIl the reporters and journalists. AI had been the most creative artist of all. His voice broke with emotion as he spoke. Robert talked about how honored he was to be in his presence and to know him. The woman remained silent. . .it was a rare gathering of men who admired each other so much.

As a gift for the Segals, I suggested a lithograph. Al chose THEY PLAYED AT THE SHUBERT...oId favorite productions with stars they knew and loved. Al signed it for them ''For Edith and Marty, for my birthday...lune 21, I 998.”

Rarely has an evening been so nearly perfect. Robert and Zoe (one of the theatre's greatest actresses) lead a disillusion about the differences in subsidized and commercial theatre…when the American theatre had writers etc. It was alI very stimulating. Marty, the former Chairman of Lincoln Center always held forth with great observations and carefully illuminated the cultural scene in New York.

The men hugged as we Ieft...what an encounter! Especially Al leaning on Arthur's tall frame. The Segals provided another wonderful venue. . .not only for good food, but food for thought.. .hosted with care and elegance. What a special evening.