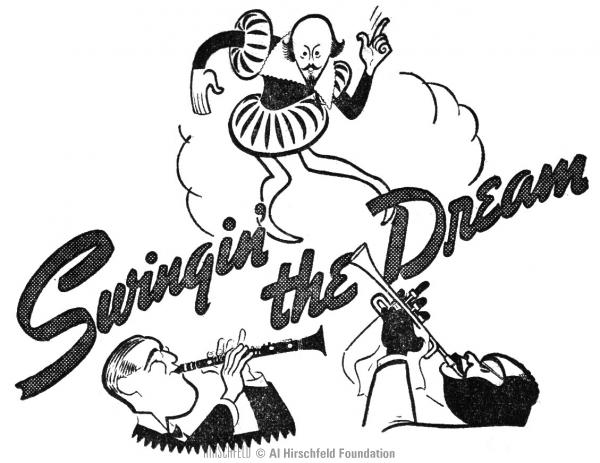 What do you call a musical comedy based on the work of the one of the most popular playwrights and featuring a cast with performers such as Louis Armstrong, Butterfly McQueen, and the Dandridge Sisters, and music by such composers as Count Basie and Benny Goodman (who also performed), and stage designs based on Walt Disney cartoons? Believe it or not, it's called a flop.

It looked so good on paper, and even today it is the holy grail of jazz and Broadway historians who have tried in vain for years to reconstruct Swingin' The Dream, a jazz interpretation of Shakespeare's A Midsummer Night’s Dream that played the cavernous Center Theatre in the fall of 1939. It ran for only 13 performances despite having all of the above, plus Maxine Sullivan as Titiania (Armstrong was Bottom, and McQueen was Puck), comedian "Moms" Mabley as Quince, the Benny Goodman Sextet on one side of the stage and Bud Freeman's Summa Cum Laude band on the other, as well as Don Voorhees conducting a 50 member pit band in the center. In addition, Jimmy Van Heusen and Eddie De Lange wrote the score, including the hit "Darn That Dream" for the show. the show also featured songs by an array of jazz composers such "Ain't Misbehavin" by Fats Waller, "Jeepers Creepers" by Harry Warren and Johnny Mercer, and "I Can't Give You Anything But Love" by Jimmy Hugh with lyrics by Dorothy Fields.

Why did it fail? Reviews at the time say it had too much Shakespeare and not enough jitterbug. Others say it was the wrong venue for a show that needed the audience closer to the action in order for the music to have the full effect. We can't tell if the critics are right because no complete script has ever been found, and this was the last true Broadway production in the theater, although it was later used for a season of opera, and subsequently for ice shows before it was torn down in 1954.

And how does Al Hirschfeld figure into all of this? He created the artwork above for the prints ads and program cover, and he subsequently drew a wild drawing of the show for the New York Times. Alas he was not paid for the former (although we are quite sure he was renumerated for the latter, as he continued to work for the publication for another sixty-three years). A lawyer friend suggested Hirschfeld sue the producers Erik Charell and Jean Rodney, and indeed the lawyer got an injunction against the production, which resulted in an impounding of all the musicians' instruments from kettle drums on down, including Armstrong's trumpet. All of which were hauled to Hirschfeld's studio, then located atop the Osborne apartment building on 57th Street. Hirschfeld was paid, the insttruments returned, and the drawings filed away inthe Hirschfeld studio for more than a half century before entering public collections.

Happy Birthday Mr. Shakespeare! We know this was not your biggest hit, but in 1939 you were still the most produced playwright on Broadway.