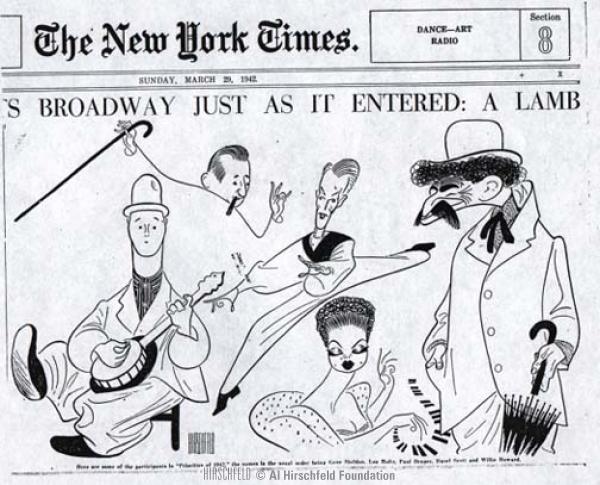 Sixty years ago on this date a vaudeville style revue, The Priorities of 1942, opened on Broadway. Produced by Clifford Fischer and the Shuberts, it was essentially a collection of vaudeville troupers do their acts. There was no over-arching story, few sets, and no production numbers, yet the show ran 353 performance. It was one of the last gasps of vaudeville on Broadway.

One of the performers, Gene Sheldon, also had a role in the Hirschfeld story. He was the orignal lead in the Hirschfeld - S. J. Perelman - Vernon Duke - Ogden Nash musical Sweet Bye and Bye. Hirschfeld and Perelman had seen Sheldon do his act and thought, for reasons known only to them, that he would be just right for their show. It turned out it was another star that got crossed in a show that was quite star crossed to begin with. Sheldon had the audacity in the New Haven tryout to jettison the script and start doing his own material. When Perelman confronted him backstage after the 1st Act demanding to know why he wasn’t using the script, Sheldon replied that the laughing heard was because of his act not the script, whereupon Perelman cold cocked him, sending him to the hospital. Hirschfeld remarked later, “we were never brought up on charges by Equity.”

Watch Sheldon do what he did best here.