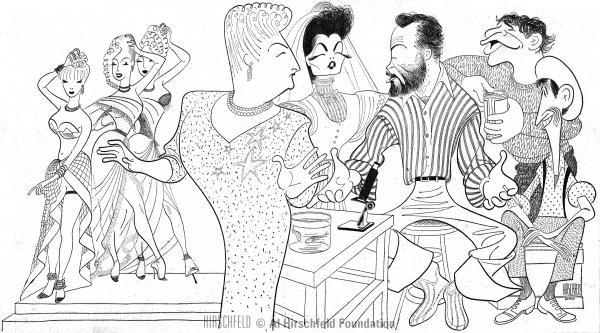 Later this week, New York audiences will see a Rodgers and Hammerstein show they have not seen on Broadway for 56 years. Pipe Dream, originally nominated for nine Tonys, is based on John Steinbeck's novel Sweet Thursday, is the story of "Outcasts yearning for a better life populate the bordellos and flophouses of a 1950s California seaside town,"  according to the City Center's Encores series which will present the show as a concert musical. "At the heart of the story is the unlikely romance between Doc, a marine biologist, and Suzy, a vagrant who has recently taken up residence at a local brothel."

In the original production, Doc was played by William Johnson, who was quickly making a name for himself in the American musical theater, before dying suddenly of a heart attack just days before his 41st birthday. Suzy was played by Judy Tyler, in her only appearance on Broadway. Her success in the show brought offers from Hollywood, and she left New York to star opposite Elvis Presley in Jailhouse Rock in 1957. She too died young in car accident just four months after Johnson's death.

The production also featured the Broadway debut of Helen Traubel, a Metropolitan Opera star who, after 25 years at the Met, had decided to explore the world of popular entertainment. She appeared in films and in nightclubs, and would eventually write two best-selling mystery novels.

Pipe Dream, which boasts such tunes as “All at Once You Love Her,” “The Next Time It Happens” and the ballad “Everybody’s Got a Home but Me,” often gets lost in the Rodgers and Hammerstein oeuvre, as it comes between two of their all time classics, South Pacific and Carousel. Pipe Dream was just a hit that ran a mere 246 performances. But stacked against some of the high water marks that their others shows made, Pipe Dream has often been overlooked.