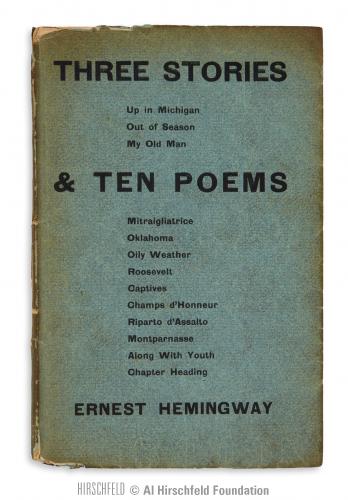 There were only three hundred copies of Ernest Hemingway's first book published in 1923, and one was purchased by a young American artist who had gone to Paris to, in his words, “get rid of the commercial side of my art." Already a veteran of movie studio publicity departments where he had only recently discovered caricature, the 22 year old Al Hirschfeld picked up a copy of Hemingway's first book at Shakespeare and Company in 1925. He had met the writer in the cafes of the Left Bank and felt he was something of a bully, but Hirschfeld did not let personality get in the way of appreciating good work.

Hirschfeld kept a copy of the pamphlet-like book in his library throughout his life. His second wife, Dolly Haas, arranged to have the slipcover case made for this book as a gift for her husband. In it, he stashed correspondence from his friend, the legendary radio personality Ben Grauer which included pages from auction catalogues that showed the value of the book in the late 1960s. Grauer spent the last decade of his life collecting information on prices and pricing, with special attention to book prices, for a projected history that was never realized. Grauer, and his wife, the celebrated interior designer Melanie Kahane, were in the close circle of Broadway first nighters of which Hirschfeld was a charter member.

This rare edition with its pedigree provenance will go up for auction on Tuesday November 13th at Swann Galleries as part of their 19th & 20th Century Literature sale beginning at 1:30 pm. All profits will benefit the non profit Al Hirschfeld Foundation's education programs.