Hirschfeld in the Movies 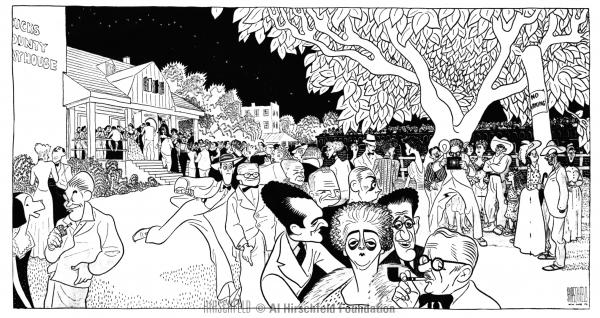 The Straw Hat Circuit, a series of summer theaters up and down the East Coast, was a regular part of the theatergoer's season in the 1930s and 1940s. Hirschfeld spent a lot of time at them in 1938 and 1939 collecting material for drawings that appeared on the front pages of the drama sections in the New York Times and Herald Tribune. When his drawing of the opening of the renowned Bucks County Playhouse in New Hope, PA was published in 1939, he almost lost his job at the Times. Beatrice Kaufman, wife of playwright George, took offense at how she was drawn, and the artist was called on the carpet.

For all we know, Al's response may have been similar to the time some twenty-five years later when Allen Funt complained about his drawing saying it made him look like an ape. Al responded, "that's not my doing, that's God's work." Cooler heads prevailed in 1939, and Al remained with the Times for a another sixty-three years.

We wish the Bucks County Playhouse, which recently underwent a multi-million dollar renovation, and is now better than ever, a happy anniversary and many, many more!