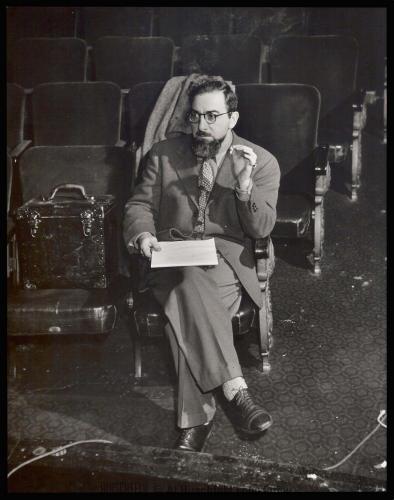 A friend acquired this photo recently and sent along this scan. On its verso, the label reads "AL HIRSCHFELD, 'The Moon Is Down', 4/8/42, Martin Beck Theatre."

John Steinbeck had wirtten a novel of the same name essentially in play form about a small Scandanvian coastal town overrun by an army "at war with Russia and England" who eventually fight back against their occupation. The nazis are never named but it was meant to boost morale both in America as well across Europe, where it was illegally published all over occupied countries such as France.

The novel was a huge success, even outselling Grapes of Wrath at the time, but crtiics felt it was a little too much proaganda and not enough literature. Steinbeck received the same reaction when it premiered on Broadway on April 7, 1942.It ran for only 71 performances.

It was a productive day at the "office" for the artist as he produced three different drawings of the show for three different publications. From the publication dates of the three clippings, the date may be wrong on the photo, as two of the three publication dates are for April 4th and 5th. Nevertheless, Hirschfeld may have gone back to the theatre to make sketches for his portrait of Maria Palmer, as we know he first saw the play in its out of town tryout in Baltimore (as evidenced by the city's name under his signature in the April 5th drawing).