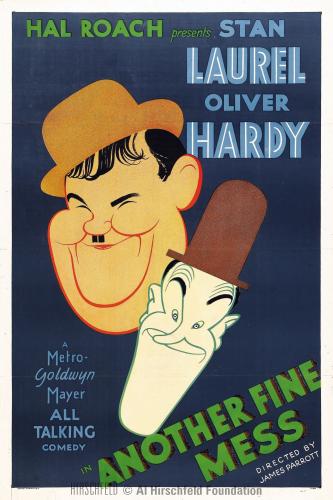 Laurel and Hardy came to MGM shortly after Al, and his ability to translate their humor and personalities into easily identified graphic symbols helped create the public’s image of them. Al created almost all of the posters and much of the black and white publicity art for their first eight feature films. His work also was recycled for many of the publicity campaigns for their short films.

In the twilight of the silent era, comic duos like Laurel and Hardy relied on physical comedy, which stressed expression and action rather than words, and therefore were rich graphic material for Al’s pen. Al loved drawing stage clowns and early silent film comedians because, as he observed, “they invented themselves. They were much easier to do, to establish a symbol for. Ed Wynn, Bert Lahr, the Marx Brothers, Fred Allen, Laurel and Hardy, Charley Butterworth, all of these figures had one thing in common, apart from their appetite for the theater — they looked like their caricatures. The caricature, with its immediacy and almost trademark quality, became the image the public figure was striving to become.”

While the original artwork for these posters has been lost, the posters themselves have earned a very important place in auction houses for Hirschfeld art and movie memorabilia. On March 22, 2014, Al’s “delightfully impish” poster for Laurel and Hardy’s 1930 feature, Another Fine Mess sold for $43,318.75 at Heritage Auctions. Despite being printed in the thousands, perhaps because of their ubiquity, few people saved the posters, and this poster appears to the only copy known to exist. At the same auction, a lobby card (measuring only 11 x 14 inches) of the team’s 1934 feature, Babes in Toyland sold for $6,214.00. In 2007, the less rare, but still “nifty stone litho one sheet,” of the duo’s 1931 comedy, Pardon Us sold for a mere $6,572.50., and indication of how quickly the market for Hirschfeld film posters is growing.

Wallace Beery and Marie Dressler were frequent subjects for Al in the early 1930s. His stunning one sheet for their film Min and Bill helped draw an audience to the film, making it a smash, and catapulted both performers to superstar status. It sold in 2010 in unrestored condition for $10,157.50. If the artwork looks familiar, and you have ever been to Disney World, you might recognize the drawing, which is the logo for Min and Bill's Dockside Diner there.

In the 1920s and 1930s, Al’s theater drawings were seen virtually every week in one of three different New York newspapers. As big as that audience was, his film posters reached a much larger audience around the country and around the world. His art not only helped establish the iconic performers of the period, but it now vital visual documentation of the artists’ career, as well as remaining fresh and engaging art.