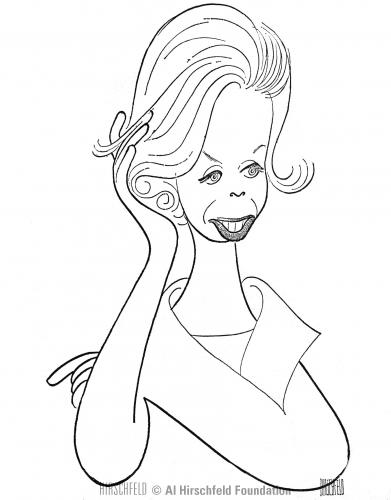 There are at least fifteen book collections of Hirschfeld art that have been published over the years, but it would take a good sized library to include all the books that have featured his drawings either in their pages or on their covers. How many of us have one or more of the annual Best Plays series where Hirschfeld theater drawings appeared for fifty years? Or the classic history of the Algonquin, The Vicious Circle, which includes individual portraits of all the Round Table members, and whose dust jacket is covered with those drawings. Many, many other books have included a single Hirschfeld drawing in their pages or on its cover, and that tradition continues today.

Just this month two new books include Hirschfeld art, and they are an unlikely duo. For You Are Here: NYC Mapping the Soul of the City, the editor included Hirschfeld’s 1935 map, “Manhattan: A Sightseer's Somewhat Distorted View.” His map, commissioned to accompany an article in The New York Times Magazine, includes only a handful of stops such as the Woolworth and the Flatiron buildings, Radio City, Barnard College and improbably the home where New York Governor (1918-1928) Al Smith lived and the home of the widow of President Harrison. It is a fascinating book with many unusual and themed maps that show New York through different eyes, and it includes essays by Bob Mankoff, Maria Popova, Sarah Boxer, and Rebecca Cooper, among others.

The second book, Dr. Joyce Brothers: The Founding Mother of TV Psychology by Kathleen Collins, is the first biography of the famed psychologist. From her debut in the public eye when she was the first woman to win top prize money on a television game show (the $64,000 Question) to her ubiquity in appearing on talks shows, sitcoms, dramas on televisions, and through her newspaper columns, magazine articles and books, for much of the second half of the 20th Century, Brothers was a familiar face to many in America. Collins chose Hirschfeld’s portrait of Dr. Brothers for her book’s cover and tells how the good doctor herself used the drawing to promote her appearances.

The Al Hirschfeld Foundation licenses all reproductions of Hirschfeld art now, and all proceeds benefit the educational programs of the Foundation. To make an inquiry about using Hirschfeld art for your project, contact us here or directly at info@alhirschfeldfoundation.org.