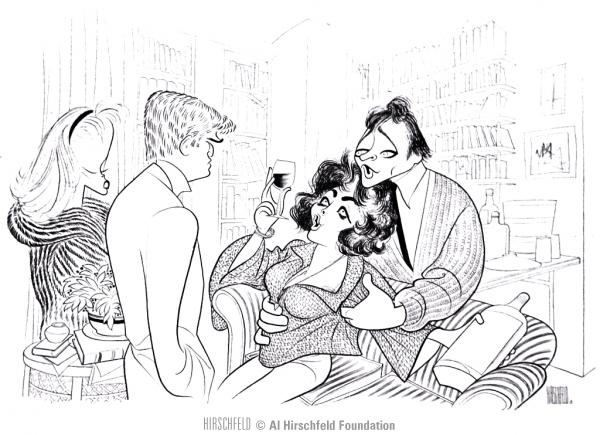 "who's afraid of virginia woolf" 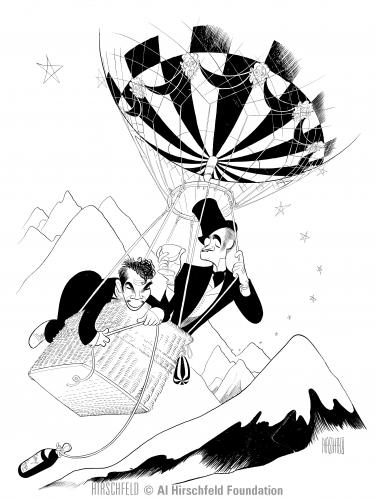 After more than twenty-five years researching Hirschfeld’s work, dozens of exhibitions, thousands of clippings, posters and all sorts of printed ephemera, one would think we have documented all of Hirschfeld’s work. We have over 8,000 individual drawings listed on our website (nearly 6,000 of them with images) and we have scoured many archives to find images. We think we have more than 95% of what Hirschfeld drew in our database, with the earliest work from the 1920s, both before and after he discovered caricature, to be the period with the most “missing” works. Much of that work was for films that no longer exist, along with the publicity created to promote them. We may never make a record of everything he ever drew, but we are close.

So it was a very pleasant surprise to discover two “new” works in the last month. These works were not from 80 or 90 years ago, not were they drawings of obscure productions with performers no one has ever heard of. Rather these recent discoveries were of Oscar-winning films with some of the biggest stars of the period in them.

The first discovery is from the classic film adaptation of Who’s Afraid of Virginia Woolf? featuring Elizabeth Taylor, Richard Burton, George Segal and Sandy Dennis. Of course, there is a very well known drawing of the film that Hirschfeld included in his book, The World of Hirschfeld in 1970, which he drew for Warner Brothers when the film was released. This new drawing was an assignment from what we believe is Life magazine, and shows a different, but equally engaging scene. This “new” drawing shows the start of the evening, and includes elements of the set. The other work shows a scene much later in the evening, and here Hirschfeld focuses on the raw emotions revealed and eschews virtually any hint of the set at all. We are grateful to Jay Polk for finding the clipping on eBay.

The second discovery is a film we have no records of Hirschfeld drawing before. It is a scene from Around the World in 80 Days, which won the Academy Award for Best Picture in 1957. Hirschfeld’s good friend (who he had traveled around the world with in “80 cliches”), S.J. Perelman won his only Oscar for co-writing the screenplay. This drawing was probably done on assignment from United Artists, who Hirschfeld had only recently started to supply drawings to, and would continue to do drawings for the next ten years. The original drawing ended up in the collection of a fellow who worked for UA distribution and we are grateful to the DeLuise family for bringing it to our attention.

Have you been in your attic, basement or closet recently? Do you have a Hirschfeld drawing or clipping in your collection that you think is unique and perhaps unknown? If it is not this website, we may not have a record of it. Please let us know and we will be happy to share it with our audience.