Album of the Week: The Three Tenors 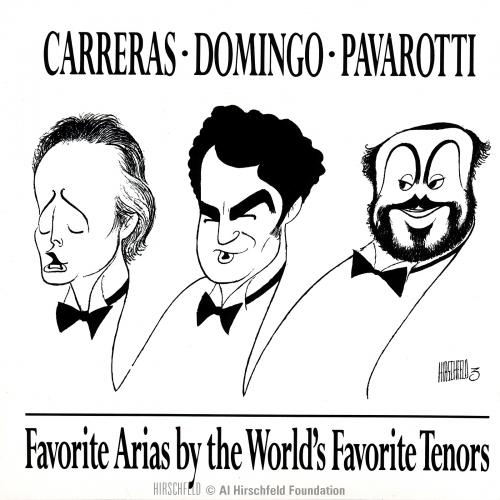 Spanish singers Plácido Domingo and José Carreras and the Italian singer Luciano Pavarotti joined forces in the summer of 1990 to perform as the Three Tenors, subsequently becoming one of the most popular acts in classical music. The trio first sang under the title for Carreras's leukemia foundation, and specifically for Domingo and Pavorotti to welcome their friend back to the world of opera after his battle with the disease. The success of the show was so remarkable, that the three would tour the world playing packed football stadiums and other large venues.

Sony immeidately recognized a marketing opportunity and within a year of the first concert, it relased an album of the tenors "favorite arias" from different operas. While the music was sung by all three of the tenors, it was not a true Three Tenors recording, but rather a way to market catalogue recordings.

Nevertheless, Sony was wise enough to have Hirschfeld draw the cover in May 1991, which help make the release a very popular recording. The drawing was later published as limited edition lithograph. Hirschfeld did a variation of the drawing with the three wearing Santa hats for a 1993 release of Christmas related music by the three singers.