Album of the Week: Merrily We Roll Along 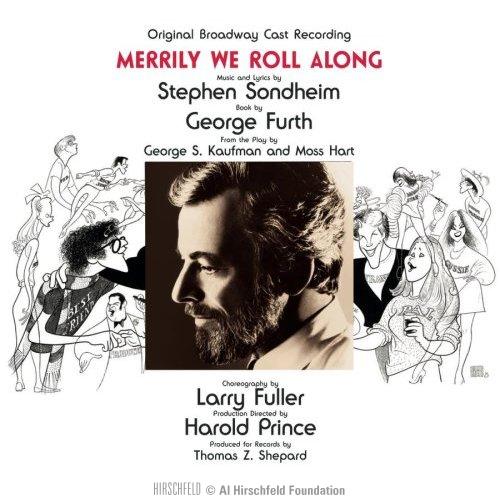 In 1981, Stephen Sondheim and Hal Prince thought they had a sure hit. They (along with librettist, George Furth) adapted George Kaufman's and Moss Hart's 1934 hit play, Merrily We Roll Along, put together a great cast, and Sondheim wrote a bevy of wonderful songs. It opened to great applause, tremendous reviews and became a long running smash...except that it didn't.

The show opened to mixed reviews, with Frank Rich in the New York Times calling it "a shambles." Ticket buyers stayed away, and the production ran a mere 16 performances. It was one of Prince's and Sondheim's biggest failures. Over the intervening years, many have tried to make the show a hit, but to date it has eluded all who have tried.

"When theater fanatics sit down to dissect the problems of Merrily," wrote current Times critic Ben Brantley in his review of the City Center's Encores presentation of the musical in Februry 2012, "it’s usually its structure that is blamed first. Based on George S. Kaufman and Moss Hart’s 1934 play about lost illusions, this musical held onto the central stunt of tracing its characters’ fortunes from their jaded present to their idealistic past. It begins with a view of a 40-ish composer at the summit of his success (in 1976), then follows him and his two closest friends back to their first meeting, two decades earlier, when the world seemed new and unsullied." While the 1934 script still holds up, the book of the musical has never seemed to live up to its score.

Hal Prince had imagined a Babes In Arms-like show and the cast for the original production was chosen from their freshness rather than their experience. The show was marked the Broadway debut of Liz Callaway, Jason Alexander (who some may know as his television persona, George Costanza from Seinfeld), and Tonya Pinkins.

Hirschfeld's drawing of the production, which was published the day before it opened on Broadway, became the cast album cover. Originally the cover was die-cut with a larger reproduction of the Hirschfeld drawing appearing underneath the actual cover. As the cast album migrated to CD, the die-cut was replaced with a photo of the composer as seen above.

Tags:
sondheim
merrily we roll along
album of the week