Album of the Week: The Golden Apple 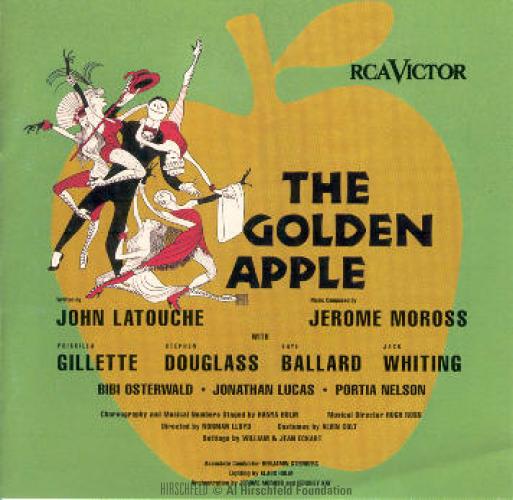 The Golden Apple, first produced off-Broadway in 1954, is a musical reinvention of The Iliad and The Odyssey, with music by Jerome Moross and lyrics by John La Touche. It transposed the action from ancient Greece to the state of Washington in 1910. Helen of Troy becomes the town's girl of easy virtue; her husband, Menelaus, is old and in the way; and Paris, who abducts her to the urban dens of inquity of Rhododendron (Troy), is a handsome traveling salesman of ladies' products who arrives in a hot-air balloon. Stouthearted, and not terribly bright, Ulysses and his heroes are veterans of the Spanish-American War; once they've retrieved Helen, their odyssey home takes them, to an island where hula girl sirens "croon-a and spoon-a" in the Guna-Guna Laguna. It soon transferred to Broadway but closed after 16 weeks despite many good reviews, and has been rarely revived since,

The show is entirely through-composed, similar to more operatic musicals like Porgy and Bess. "The Golden Apple benefits from imaginative theatricality in all departments," wrote Broadway historian Steven Suskin, "but it was the more-than-glorious score that carried this brilliant musical theatre experiment from Off Broadway to the Alvin." Jerome Moross was a Brooklyn-born composer and orchestrator, who was already an accomplished pianist at the age of five and began composing music three years later. He graduated from New York University at the age of eighteen. He scored ballets for Ruth Page and Ballet Ballads on Broadway with John La Touche, before La Touche and Moross began work on The Golden Apple.

La Touche was a Balitmore-born musican and writer, whose work first appeared on the Broadway stage with two songs in the 1937 revue, Pins and Needles. In 1939 he wrote the lyrics for "Ballad for Uncle Sam", later retitled "Ballad for Americans", for the WPA show Sing For Your Supper. This 13-minute cantata to American democracy was so stirring that in the 1940 presidential campaign, it was played at both the Republican National Convention and the American Communist Party convention. La Touche went on to write the lyrics for Cabin in the Sky, the all-black musical comedy composed by Vernon Duke in 1940.

Hirschfeld's drawing originally appeared in the Times when the show transferred from off-Broadway, and it graced the programs, posters and eventually the cast album. The album features only half of the score because of the space limitations of vinyl LPs. The recording only features the finale of the Broadway run of the show, The finale was replaced on the insistence of the producers who wanted a more traditional musical ending, in this case a reprise of "Coming Home Together" with the chorus. it was eventually replaced in the published score by the original ending.