Album of the Week: David Steinberg 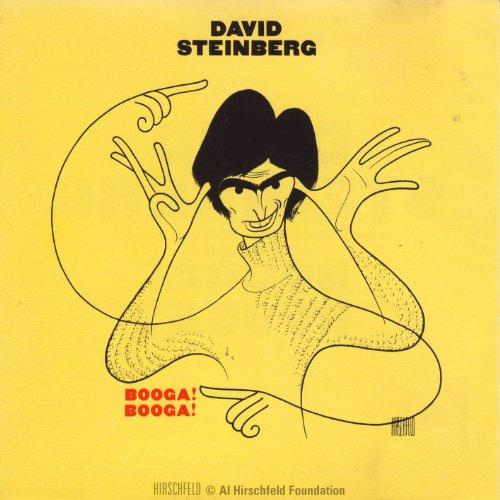 Comedians have always been a rich vein for Hirschfeld to mine. He loved comic figures such as Ed Wynn, the Marx Brothers, and Laurel and Hardy, who created their own caricature. Despite the fact that he enjoyed drawing the “overactive thyroid” cases, he was equally adept at capturing the more cerebral comedians who did wear baggy pants, oversize glasses, or silly wigs such as Garry Shandling, Johnny Carson, Jay Leno, and David Steinberg, who is the subject of this week’s Album of the Week.

Steinberg’s Booga Booga record, released by Columbia in 1974, is a snapshot of the comedian at an early peak in his career. At the time he was a frequent guest host on The Tonight Show and ABC’s popular music show, The Music Scene. He had filmed a summer season of The David Steinberg Show, which foreshadows Garry Shandling’s own fictional talk show. The year this record was released, according to Steinberg’s website, “David was scheduled to be on the cover of Newsweek alongside Richard Pryor and Lily Tomlin, only to be bumped last minute by his nemesis, Richard Nixon.” He soon returned to Canada for a sitcom that helped to introduce John Candy, Joe Flaherty, Martin Short, Dave Thomas, Andrea Martin, Catherine O’Hara to television audiences, and who later morphed into the classic SCTV cast.

Although his satiric “sermons” on The Smothers Brothers Comedy Hour helped get the show cancelled, he has enjoyed a long string of successes on TV directing episodes of Friends, Seinfeld, Mad About You, Newhart, Designing Women (which he also executive produced), Weeds, and Curb Your Enthusiasm.

Hirschfeld had been supplying drawings for Columbia album covers since 1958, and here he revels in his favorite human appendage: hands.