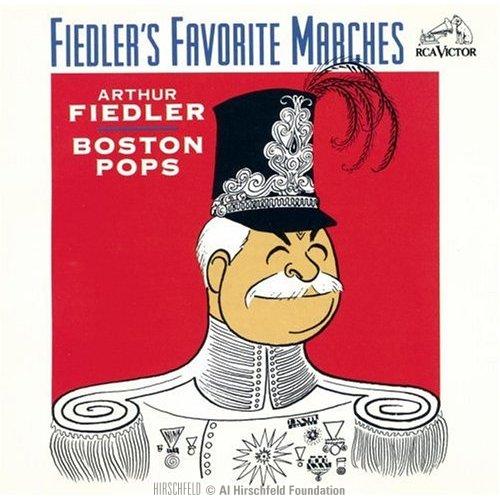 People often ask who Hirschfeld drew the most? Carol Channing (39 times)? Fred Astaire (32)? Frank Sinatra (42)? No, the answer is Julie Andrews, who he drew an astounding 54 times. but in looking up these facts and figures, one name keeps coming up: Arthur Fiedler, who Hirschfeld surprisingly drew 18 times. While none of the other names mentioned here have any album covers in their Hirschfeld resumés, all of Fiedler's drawings were done for RCA of BMG record covers.

Fiedler was the longtime conductor of the Boston Pops, and he had the orchestra concentrate on popular and light classical music. A fine conductor and even better showman, Fiedler made the Boston Pops the most popular classical music orchestra in the country, and among the most recorded. The Pops' first recordings were in 1935, and in fact it was the Boston Pops who made the first complete recording of George Gershwin's "Rhapsody in Blue." Their first long-playing record was released in 1950. Hirschfeld's first album cover of Fiedler was in 1965 for the album American Salute which depicted the conductor dressed as the Statue of Liberty. He did four others for RCA in the 1960s and 1970s.

In the early 1990s, BMG was eager to reissue the RCA catalogue of Fiedler recordings and they commissioned Hirschfeld to show Fiedler in a series of unusal settings including in outer space, on a skateboard, and in box office for covers of CDs. In five years, Hirschfeld drew Fiedler thirteen times .