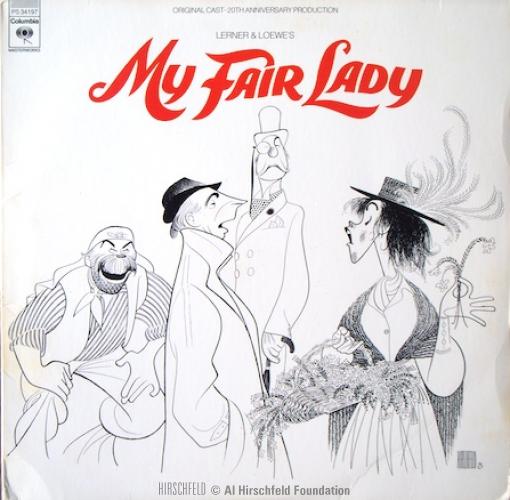 Hirschfeld’s drawing for the original production of My Fair Lady in 1956 is one of the American Theatre’s great pieces of iconography. The image of Shaw manipulating marionettes of Rex Harrison and Julie Andrews that appeared in prints ads, window cards, the program cover, and of course the original cast album cover is the stuff of legend. Hirschfeld eventually created a second work with generic actors that is often used to promote professional and amateur productions around the world.

Although Hirschfeld tired to convince Moss Hart, the show’s original director, that Pygmalion could not be improved with songs and dances, he ended up drawing not only the original production both for publicity and in his regular Sunday feature in the New York Times, but all three Broadway revivals over the next four decades.

The first Broadway revival, a 20th anniversary production in 1976, starred Ian Richardson as Henry Higgins, and Christine Andreas as Eliza Doolittle. For that production’s cast album, Columbia again turned to Hirschfeld stiching together both his Sunday drawing that appeared just before the show opened, and a “Friday” drawing of George Rose as Alfred P. Doolttle that appeared in the paper’s theater column.