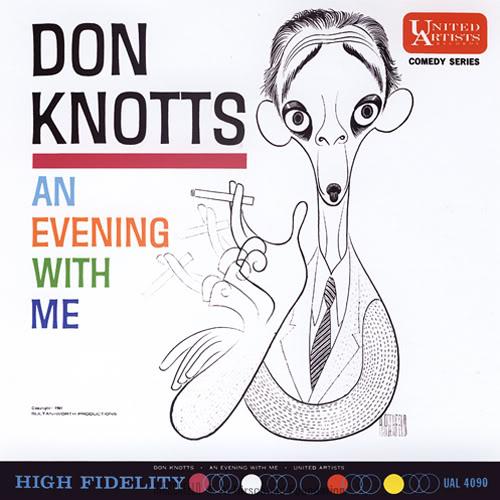 This 1961 album was released by United Artists Records, a label started in 1957 preimarly to release sondtracks of UA films, but later expanded to release all kinds of music and comedy. The label would eventaully also act as a distributor for a variety of releases, including Grateful Dead Records in the early 1970s.

Hirschfeld had been supplying drawings for United Artist films since 1955 (and actually went back to 1928 for the original United Artists film studio), and was a mainstay there during its heyday in the 1960s. Not surprisingly, he was also tapped for album covers. His first seems to have been a recording of his old friend Alex King, Love and Hisses, in 1960.

Don Knotss is of course best remembered for his perfomance as Barney Fife, the bumbling sheriff's deputy in Mayberry on The Andy Griffith Show on television in the 1960s. Knotts was a natural for Hirschfeld's pen as his nervous and awkward characterization was a caricature unto itself, yet he played the "comic and pathetic sides of the character with equal aplomb," according the Museum of Broadcast Communication. He got his start on televison on the Steve Allen show where he was part of Allen's cast, appearing most memorably in Allen's mock "Man in the Street" interviews, Frequently as an extremely nervous man who had the unlikely jobs of surgeon or explosives expert.

On this record he reprised many of his most popular bits from the Allen show which was released soon after he got his start on the Griffith show.