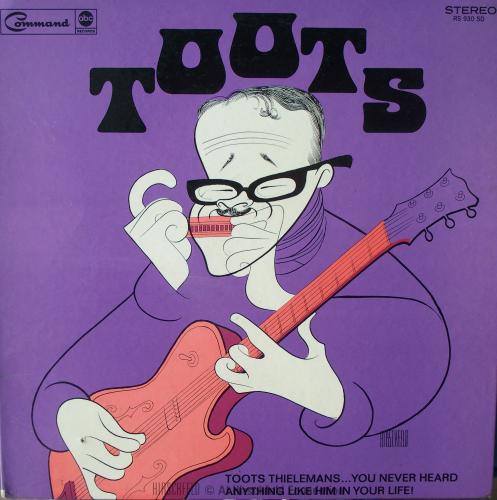 This is the first in a weekly series of Hirschfeld album covers.  Check back every Wednesday for a new cover in our record collection.

Toots Thielemans, a Belgian born jazz musician known for this guitar and harmonica playing as well as his whistling, is a certified legend, named as an NEA Jazz Master in 2009, the highest honor for a jazz musician in America. Thielmans began his career at the top, jamming in Paris with Sidney Bechet, Charlie Parker, Miles Davis and Max Roach. He toured with Benny Goodman, recorded with sax player Zoot Sims, and played and recorded with Ella Fitzgerald, Jaco Pastorius, Peggy Lee, The George Shearing Quintet, Quincy Jones, Oscar Peterson, Bill Evans, Paul Simon, Billy Joel, Astrud Gilberto, Shirley Horn, and others. He even had his own hit single in 1962, “Bluesette.” John Lennon saw him play in the Beatles early years in Hamburg and was so impressed that he bought a similar guitar and harmonica, which were used on many of the Beatles’ earliest recordings.

In 1968, Command Records, an audiophile label that released recordings by Count Basie, Dick Hyman, and even John Gielgud’s 1963 production of School for Scandal, commissioned a Hirschfeld portrait of Thielemans for the cover of a release simply titled “Toots.” “Despite the meticulous recording techniques,” wrote one record historian of Command Records, “almost everything released on the label could be described as MOR or lounge music.” This LP is no different., but the cover is fairly dynamic.